The Guide to Consultative Selling in 2019

Consultative selling goes by many names including needs-based selling, solution-based selling, and finally, the type of selling your SaaS salespeople should be adopting in 2019.

One-size-fits-all is out, and full customization is in. Your customers and leads all experience their own unique set of issues, and would rather not cover them with a generic ‘brown band-aid’ solution.

Your leads want to be special. They want you to bend over backward to get them the Spiderman band-aid while singing their favorite song and being provided their favorite juice box.

What your customers and leads want most is for you to help them find the solution to their individual issues, even if they aren’t sure what they are.

What is Consultative Selling?

Consultative selling is anything but a cookie-cutter approach. Your salesperson has to do their research, really listen, give advice, and tailor their product suggestions and sales pitch to the customer.

Think about it like this: when a patient comes in to see a doctor, the doctor will open up the patient’s medical records, ask questions about what symptoms the patient is currently experiencing, ask about environmental factors such as stress, exercise, nutrition, sleep, work, family, etc. and then make suggestions about next steps. Instead of automatically assuming what the patient came in for, the appointment is catered to the needs of the patient to help cure whatever ailment is affecting them.

This is the model salespeople should be taking to appropriately prescribe exactly what the customer needs. Let’s break it down:

Lead comes in with a problem: Generate Demand

When a patient has a problem, they get scheduled in with a doctor. The same thing goes with a lead. Once they have been nurtured and understand they have a problem your company can fix, it’s time to schedule them in for a call!

Preparing for the appointment: Research

The scheduled meeting or appointment comes around. A doctor has their patient’s medical history available to understand any background information that may be needed. Likewise, a salesperson should come prepared with all the relevant information they have accumulated through the lead nurturing process.

This is the core of consultative selling. The definition of consulting is to provide professional or expert advice. It’s hard to give advice about a situation if you don’t know what the situation is.

If we go back to the doctor example, the doctor asks what symptoms the patient is experiencing. In consultative selling, it’s the same concept. You’re trying to figure out where the pain point(s) lay. Start by asking questions based on research of the lead that are relevant to the products you sell such as:

The first question is directly related to the inbound lead nurturing you achieved through BoFu content. They have given you an indication about what their problems may be, which makes your job that much easier.

The second question is all about showing a genuine interest in the company. Build trust by giving a compliment based on the data collected in the research stage. This step should be all about having a conversation. The questions should all flow so the prospect feels like they can open up to you.

Gong.io found that the ideal number of questions in the most successful discovery calls is between 11 and 14. With fewer than 11, you may not get all of the information you need, and more than 14 makes the prospect feel like they are being interrogated. 11 to 14 is that happy medium that is jusssstttt right.

With all of the information the salesperson has collected, they should be able to make a product or service recommendation that will fit the needs of the prospect.

This can be compared to the prescription a doctor will give after an appointment. The diagnosis determines the treatment. The most important word here will be value. The solution will solve the problem and deliver value.

The consultative selling method is intended to lead to a sale. The salesperson will make recommendations and apply their sales pitch to this stage in the process. The salesperson should inform the prospect about the product while highlighting how it relieves the uncovered pain point.

Now that you understand the basics of consultative selling, there are a number of important tips to remember to implement the sales tactic in a skillful way.

First of all, the importance of listening cannot be stressed enough. We aren’t saying that your salespeople don’t listen. But we are saying they could always listen better. Here are a couple of listening tips to remember to ace the consultative selling conversations.

Becoming a good listener is one of the keys to consultative selling. It takes practice and discipline. It can be useful to incorporate these tips into everyday life to get used to it. You might learn something new, understand something better, or avoid an argument with a significant other. Who knows if you don’t try!

We’ve all had those awkward dead-end conversations. It’s cringe-inducing just thinking about them. It feels like people are talking because they feel obligated to, or worse, they tell you way too much.

Essentially, this tip boils down to an important rule, both in sales and in life: don’t be awkward. This includes talking too much as well as not enough—make sure you don’t “show up and throw up”. A salesperson should be approachable and informative but in a conversational way. It’s all about finding that middle ground.

Respond to what the prospect says in small doses and clarify that they understand. Speak with enthusiasm and be engaging. If you’re excited about what you’re offering and how it can solve the customer’s problem it is far more likely they will get excited about it too.

This should go without saying, but it’s easy to tell when people don’t actually care. Being genuine can only happen if you actually listen and are conversational. Remember the core of consultative selling? It’s all about asking questions relevant to a prospect’s situation.

The other benefit to being genuine is it helps to build trust. Credibility and trust will improve any salesperson’s ability to sell effectively, whatever the approach they choose.

Consider this: would you follow the advice of a consultant you don’t trust? Probably not. The same goes for salespeople—especially those using the consultative selling method. We’ve all experienced the irritation of receiving a sales call from someone who obviously is more concerned about making a sale than they are about solving any problems other than their own. To avoid being one of those salespeople, keep the conversation in the customer’s best interests, be honest, and be genuine.

We’ve talked about the importance of product knowledge in a sales context, and it is applicable to the consultative selling method.

To incorporate the ‘selling’ part of consultative selling, it’s important to know exactly what product will solve your customer’s needs. Salespeople have to find the missing piece in any given situation and be able to explain why the product or service will fill the void.

Take a look at some tips to incorporate product knowledge training here!

Consultative selling is all about finding the prospect’s pain point and giving them the right advice specific to solving their problems.

If done skillfully, the consultative selling method can help your salespeople build trust and expand business with your customers. By following these tips, getting lots of practice, and using the method in the right context your salespeople will be on their way!

The most important thing to remember is that your customers want to feel special and in control. With the specifics of their unique situation in the conversation, they heard, understood, and will feel like the most important customer in the pipeline. 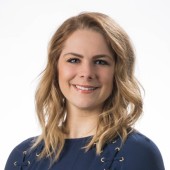 A busy bee that you can find spending time at the gym, reading, hanging out with her black lab Joey, or visiting the newest restaurants in town. As she works to finish her marketing degree, Alayna uses her creativity as a Marketing Content Creator at Vendasta.

Outsourcing Sales: Everything You Need to Know

Modern Sales Enablement: Tools and Software to Increase Your Revenue

Managing Your Sales Pipeline: Advice from the Experts