Yelp Reviews and the Growing Importance of Review Monitoring

Yelp reviews are designed to help people find great local businesses like dentists, hair stylists and mechanics. It has become so popular over the last decade that more than 89 million users a month have been recorded reviewing local business just on their mobile device alone (Yelp!).

Consumers who review businesses and leave business reviews on Yelp have become known widely as “yelpers.” Yelpers are gaining lots of attention—in fact, South Park even produced an episode known as “the Yelper Special.” Yelpers leave reviews to help others in the community make purchasing decisions, and it’s important for your local business clients to keep an eye on them.

Why Should You Care?

As the world’s largest outlet for online reviews grows, review monitoring for your local business clients grows in importance, too. Considering 92% of consumers now read online reviews before purchasing, it might be time for all small businesses to start caring about what is said online; and more specifically, about their Yelp reviews.

It’s pretty simple: when consumers are looking to find trusted local businesses, they look at what other people have to say. Yelp provides consumers with confidence; consumers look at reviews of businesses with sparkling online reputations to make purchasing decisions. However, with over 90 million reviews of local businesses through three quarters in 2015, it’s likely that all businesses will have to deal with numerous not-so sparkling reviews as well (Yelp!). Consumers aren’t going to give a small business any attention if all they see is negativity surrounding their Yelp review page. 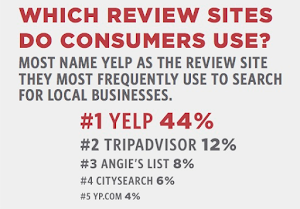 Yelp has rapidly become the “go to” in small business reviews (Yelp!). Actually, Yelp scores nearly 30% higher than it’s next leading competitor in terms of most frequently used review sites. So if almost half of consumers are using Yelp, maybe it’s time for small businesses to make sure their Yelp presence is accounted for.

Small businesses are always looking to build credibility. Yelp reviews are an outlet that can either really help or really hurt a business's integrity. When reviews are mainly positive, a business builds a sense of trust with its community and customers. Consumers are looking to do business with places that are trusted, not a business that constantly is receiving “one-star” reviews.

In an interview with Zach Anderson, National Client Partner with Yelp, Zach discussed why people mainly use Yelp.

“I believe our users are coming to Yelp to find local businesses because they can trust the overall content they find on our site. Yelp aims to provide the most helpful information available. While not the only reason our users visit Yelp, reviews do give credibility to the business, and the volume of reviews is a trust signal for users.” - Zach Anderson

There’s nothing worse than spending your hard earned money at a business that provides terrible service and who doesn’t treat their customers as a priority. Consumers check online reviews to greatly minimize the chance of having a bad consumer experience. Yelp reviews allow consumers to trust a small business and be confident in their purchasing decisions. From a small business perspective, the higher the review ratings on Yelp, the better chance you will attract more consumers.

Yelp grew over 140 million dollars between 2013 and 2014, so it is evident that consumer reviews are gaining popularity (Statista). Although businesses gain credibility in many ways, Yelp is becoming one of the most efficient ways for small businesses to build trust with their communities.

It’s probably time to stop ignoring online reviews, after all everything nowadays seems to be linked to the online world. Small businesses shouldn’t neglect the idea of actively overseeing their online reviews. It may seem like a chore to go through review after review from various reviews pages such as Yelp. However, there’s a ton of reputation management softwares for small businesses to see what their customers are saying and to assist with managing their reputation. When a business can effectively monitor their online presence, they will begin to understand what their consumers want and how to offer that to them. After all, small business relies on consumers, so it’s vital that small businesses are aware of what consumers are saying online.

See our: Top 10 Review Websites to Get More Customer Reviews On

Negative reviews can really hurt a business's reputation, and it’s especially important not to ignore these reviews. But what about reviews that are highly positive? Cars.com recently conducted a study of 10,000 randomly selected automotive dealership reviews on their site. It showed that dealers who responded to ALL reviews, not just the negative ones, received the highest ratings and were the most popular.

Often times, businesses pay attention to the negative reviews about their business, and try to mediate the bad experience with the consumer who left the review. Although it is very important to deal with unsatisfied customers, it’s also essential to connect with the satisfied customers. When a person goes out of their way to offer some uplifting words and a positive review about a business, don’t ignore it— encourage your local business clients to thank them! When small businesses acknowledge consumers who leave positive reviews, they build a sense of loyalty with that consumer, and have likely gained their business in the future. Acknowledging both the good and bad reviews is important, and can really give small businesses an edge over their competition.

The Downside of Yelp Reviews

Of course, many small businesses don’t like Yelp, as their algorithm is very ambiguous, and can surface negativity towards small businesses. Yelp has been scrutinized for favoring businesses who pay for advertisements on their site and ridiculing the businesses who refuse. Ed Wells is a business owner in Jupiter, Florida. He owns a local restaurant known as Chowderheads, and believes that Yelp is a threat to his business. Wells had contacted Yelp about his reviews, and was cursed out for not buying advertisement on the site. According to him, shortly after he contacted Yelp, a load of negative reviews started to pour into his business's Yelp page. In addition to this, like the claim of other small businesses, there was reason to believe that the positive reviews about his company were being filtered out. Although Yelp denies there is any truth to this scenario, there are many stories similar to Ed Wells’ story in Florida. Although Yelp has gained popularity with consumers, not all small businesses have fallen in love with the online review mogul.

Also see here: How To Respond To Positive And Negative Reviews

Still, as Yelp becomes a more dominant social-local platform for online reviews, it’s time for businesses to recognize the power of Yelp reviews. With over 142 million users on Yelp each month and a major influence on google’s local search engine results, Yelp can really help or hurt small businesses. Recognizing the significance of a positive presence on Yelp can give a small business an advantage over the businesses who refuse to pay attention to their Yelp reviews! Browsing online reviews is the first step for many consumers in the buying process, and Yelp has proven to be the starting point. Pay attention to online reviews, and let Yelp help.

Zach works as a content strategist with Vendasta while finishing up his degree at the University of Saskatchewan. He is fascinated by digital marketing, international studies, and exploring the relationship between technology and business.

Google Workspace Pricing is Changing: How to Optimize it for Clients

Learn how to best inform your clients and ensure that they each get the Google Workspace pricing tier optimized for their business needs. Navigate the change for yourself and your clients with ease by working with a third party that has a working... Read More

How to get your ecommerce clients to first sale…ASAP!

With your help, ecommerce doesn’t need to be difficult for small businesses. Learn how your agency can get clients to first sale as quickly as... Read More

Do What You Love, Leave What You Don’t to New Marketing Automations

Repetitive tasks like booking a meeting, sending an email or updating a spreadsheet can creep up and snatch away time from the things we love doing most. Whether your passion is helping clients one-on-one, getting on the phone with a lead to really...