Moving to the Monorepo: A Reflection on the Good, The Bad, and The Ugly

Micro-frontends. Monorepos. What’s trendy one year can be heresy the next. The year after that? A saving grace to the world of frontend development. After that, a decision that continues to divide developers.

Vendasta houses a great number of our frontend applications and libraries inside a monorepo that we have code-named “Galaxy”, powered by Nrwl’s NX tooling. The monorepo was introduced to do a number of things, including but not limited to:

Before the spring of 2020, Vendasta heavily invested in a hybrid model that had some core frontend projects living in a monorepo but some SDKs, libraries, and all applications living outside in their own repositories. It worked well for the time but had a few drawbacks, the biggest being the development cycle.

Developing in the hybrid world

Let’s start by breaking down exactly what’s going on in the graphic below. 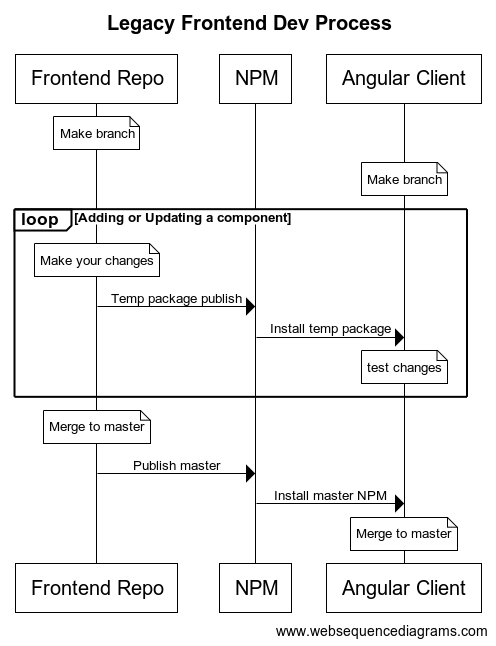 The process for working in our legacy frontend stack

Most of these steps require waiting on builds, waiting on publishing, and installing the changes into the project of choice. In the end, your hopes of reaching the final step depend on nothing going wrong along the way. As you can imagine, this type of a process leads to not wanting to make shared components in favour of just writing the components where they are needed, and copy/pasting them in other projects where they need to live. This isn’t the wrong way to do it, but if you ever want updates to be reflected across the entire platform, you’re stuck copy/pasting code even more and potentially fighting with changes other developers may have added in their projects.

In an attempt to try and increase code sharing and reduce the number of one-off components being made, we formed a frontend infrastructure team dedicated to owning a core library of components for others to use in our applications across the platform. To start, we explored several different ways of creating micro frontends to make it easier to serve smaller artifacts to projects so that developers could pick and import exactly what they needed into their projects. This included making use of a snazzy new product called bit.dev, which specializes in React and Angular micro frontends. Imagine that each component is its own npm package with its own sandbox to play in before importing it into your project.

This began to prove very useful as developers that required common shared components no longer needed to create them themselves or wait on the old dev cycle and then have to maintain these components. The frontend team would take special care in crafting each component to suit the needs of multiple consumers and publish it to bit for others to test and make use of. Maintenance was now extracted in a way that decreased one-off components but, unfortunately, this came with a huge drawback: each project had a different version of these components in a relatively short time period. This is something we knew was a problem in the past, so we quickly moved away from bit.dev in favour of another solution. Something that hadn’t been around in awhile that developers were starting to rant and rave about again.

Micro Frontends quite obviously had bitten us several times, so we decided to make the shift to the polar opposite side of the development world: introduce a monorepo that’s built on Nrwl’s NX monorepo tooling.

Once inside the monorepo, the first order of business was to dog-food it by starting our work on the Galaxy Frontend Framework that would be used by all residents of the monorepo and by clients that live outside. This would allow us to start to work out some of the kinks of the monorepo, learn the process, and create more tooling before any other dev teams moved in. Our goal, after all, is for every single frontend project at Vendasta to live in the monorepo. An added perk is that any libraries in the monorepo are evergreen.

Our goal, after all, is for every single frontend project at Vendasta to live in the monorepo

After sorting out the project structure, properly making use of NX build settings, and starting to use a new tool called Codefresh for our CI/CD management, it was time to start bringing projects and dragging along the developers who work with them. Migrating projects into the monorepo is fairly straightforward but involves changing the directory structure of the project to match that of the NX monorepo, and then using git to copy the project over.

The Good, The Bad, and The Ugly

We can’t expect any new piece of technology to be a silver bullet. We have discovered some drawbacks which can be solved and have been finding more and more than the benefits are impactful and plenty. I like to understand this process in terms of the classic Western film, The Good, the Bad, and the Ugly.

As we can see from the graphic below, the dev process has been drastically improved for the residents of the monorepo. As a quick example, developers need to make a branch in a single repo to update or add a new component. Their changes are reflected immediately since code is now living side by side—no more waiting on npm publishing. Once they’re happy with their changes, the developer is ready to do a code review! If they need to, they can have libraries automatically published that can be consumed outside the monorepo.

The monorepo dev process happens all in one repo.

Each engineering organization has different needs. Sometimes micro frontends are king, but for Vendasta we have navigated back into the world of a monorepo. So far the benefits we’ve encountered outweigh the negatives, which can always be resolved via some smart minds and the elbow grease of a couple of developers. In the end, the biggest improvements we’ve seen are a faster dev process, increased code sharing, and a reduction in disparity of dependencies. Stay tuned for more on the Vendasta Frontend stack.