On the day Vendasta’s Jacqueline Cook received a career-defining call that she had been selected as one of Canada’s top young leaders, she had a difficult choice to make.

Should she clink champagne glasses after work with her tight-knit executive team? Or should she go home to her husband and children? She chose family.

“I felt this award is really my family’s. When I got home, I ate cold chicken nuggets and french fries left on the stove. Everyone was ready to sleep, so I got to snuggle my little guys, give one a bottle, and tuck the other one into bed,” she says.

“And that's honestly the only way I would've celebrated: giving my boys and my husband a big squeeze, and thanking them for the time that it took to achieve this award.”

Cook’s inimitable trait of humility and the fact she could - and was celebrated by colleagues - for choosing family above all else underscores she’s at the forefront of a world where what defines leadership is rapidly changing. Enter an era where egalitarianism, empowerment, and sharing successes are the new normal.

In being named an honouree in Caldwell and PwC’s coveted 2021 Top 40 Under 40 list, Cook dispelled the myth that career and family are merely “competing priorities” and proven, especially to women, you can have it all. 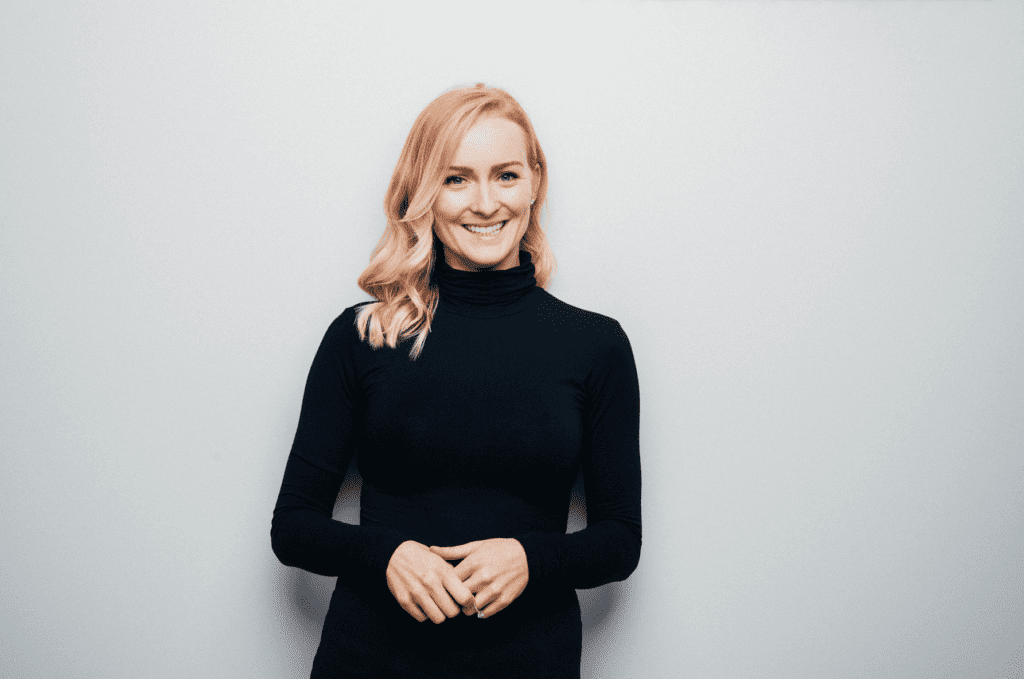 Throughout her life, Cook always had an adventurous and entrepreneurial streak about her.

She played competitive sports, studied commerce at the University of Saskatchewan (where she dropped out briefly to travel the world as a youth ambassador), and ran her own businesses.

She joined Vendasta in 2014 and played an instrumental role in shaping the technology company’s business strategy. Currently, Cook is Chief Operating Officer and responsible for the development and execution of Vendasta’s revenue and go-to-market strategy.

Cook also plays a key role in raising and allocating capital for Vendasta, and one of her biggest successes was working with a core team to secure a historic and oversubscribed C$120 million private placement in May 2021, days after her second son was born.

The raising was one of the largest in Western Canada and specifically a record for a company based in the province of Saskatchewan. 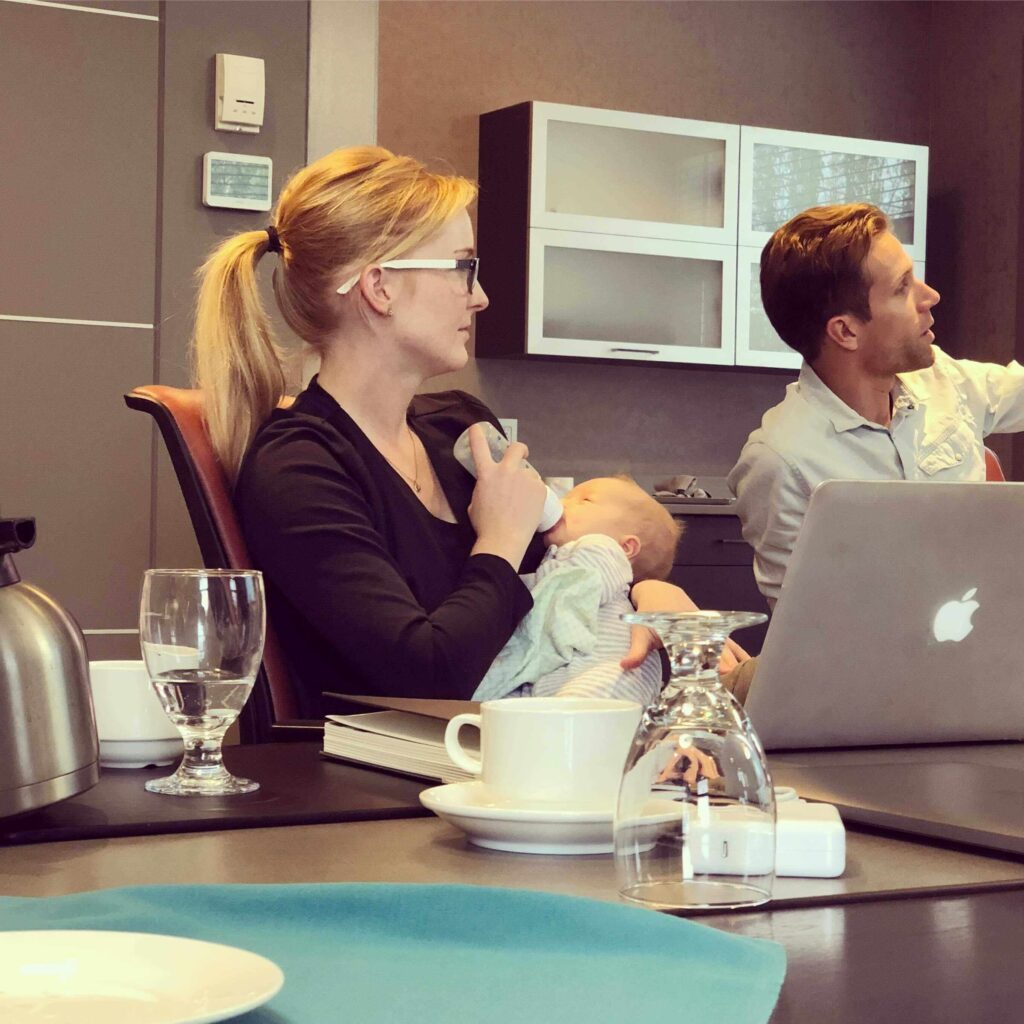 Can’t stop me, baby. Cook with her newborn, at an executive meeting

You kind of have to be a little crazy and loony in your dreams and your visions or else they will never be a reality. That's not been done. It's never been done in Saskatchewan. But if it wasn’t for our insane competitive spirit and internal optimism, then great things won’t be done.

Raising capital not the be-all and end-all

While raising capital is a lucid dream for most entrepreneurs, Cook’s advice, paradoxically, is to not do it.

Instead, start-ups should focus on boosting sales by creating a product people enjoy and want to pay for.

“Venture capital should accelerate that, not replace that. And that’s the thinking a lot of tech companies are missing,” she says.

“Everyone wants to be the next success story and follow in the footsteps of the Atlassians, AirBnBs, and DoorDashes of the world. Yes, there is a lot of money sitting around but that doesn’t have value until you put it to work and create value with it.”

In her mentoring initiatives, Cook often reminds aspiring founders to try and solve “real problems” rather than create technology first and then figure out if it’s useful.

Get to know the problem space deeply rather than the solution space. Become an expert. People pay for you to solve a problem, they don’t necessarily pay you for a product. Raise money from your customers by obsessing about their problems more than anyone has the patience and drive to.

Another important business lesson from Cook is that founders, executives, and investors shouldn’t be hoodwinked by “north star metrics” (NSM).

NSMs have become increasingly popular among companies, especially in technology. They usually denote an indicator of revenue, customer value, and measurement of progress.

As an example, Airbnb’s NSM is “number of nights booked” as it correlates to profitability and usage of its short-term rental platform by hosts and guests.

But NSMs can be misleading. As an example, if Airbnb ran a promotion offering homes for $1 a night, then usage would surge but revenue would decline, though it might feel delightful for a CEO to say - and investors to hear - that the number of nights booked jumped when in reality profit margins sunk.

That’s why Cook advocates NSMs should be linked to “check metrics” which act as guardrails to ensure key business goals are achieved  in a sustainable way and to prevent strategies designed to game them.

“Are customers buying a million units of a $1 item compared to one unit of a $1 million item? Those are check metrics of one another - one captures quantity, generally, and one captures value,” she says.

“The first captures value, the second captures volume and if more local businesses are buying products and services, then agencies and vendors are proving their value and our whole ecosystem is growing.”

For someone who’s not even hit age 40, Cook has racked up a stellar list of professional achievements. She’s also volunteered for non-profits that aim to reduce bullying and improve the wellbeing of inner-city kids.

Cook is also the founding board member of Co.Labs, a technology accelerator that she and her husband devote significant amounts of personal time to.

So, what can young professionals and business students do to follow in her footsteps? For a start, pick up a sport and go travel (when it’s safe to do so of course).

She attributes much of her career success to soccer and exploring the world, describing herself as “not a model student” and someone who didn’t get “straight As” while studying at university.

Cook playing soccer for the University of Saskatchewan Huskies

“There are so many human, mathematical, and physical elements that I learned through sports that I apply to business,” Cook says.

“And I think the greatest entrepreneurs are those who find something within themselves to pick themselves back up again, time and time again. And I think that's part of what sports teaches you as well, to get back up on your feet.”

Cook dropped out of her second year of university to travel the world and represented Canada as an ambassador for several organizations promoting youth entrepreneurship and leadership initiatives.

There are so many human, mathematical, and physical elements that I learned through sports that I apply to business. And I think the greatest entrepreneurs are those who find something within themselves to pick themselves back up again, time and time again. I think that's part of what sports teaches you as well, to get back up on your feet.

From Asia to Europe, she’s covered six continents and even got to meet the former leader of the free world while still in her 20s. 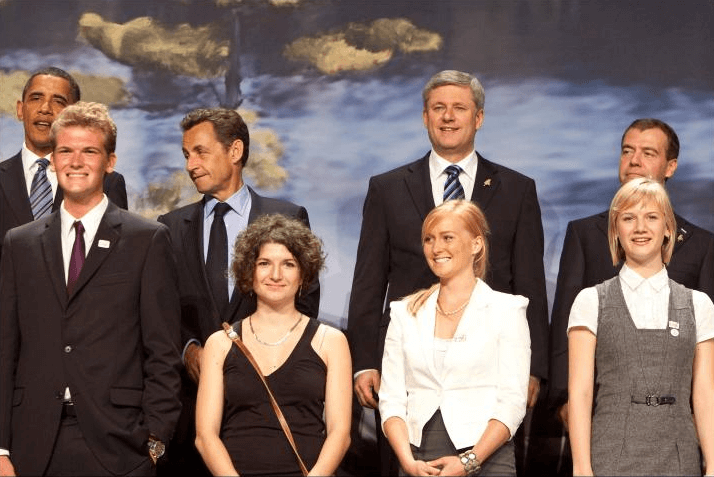 In the front row: Cook (in the white jacket) with other ambassadors at a youth summit. In the back row: from left to right: Former U.S. President Barack Obama, former French President Nicolas Sarkozy, former Canadian Prime Minister Stephen Harper, and former Russian President Dmitry Medvedev

One of her most eye-opening experiences was living in Switzerland during the global financial crisis in 2008, which gave her a newfound appreciation for macroeconomics and how financially interconnected the world is.

“When you're in one geography, you really only have one perspective and there are so many unknowns, but when you see it through the eyes of different people and different cultures, you understand the world is a whole lot bigger than you ever anticipated,” she says. 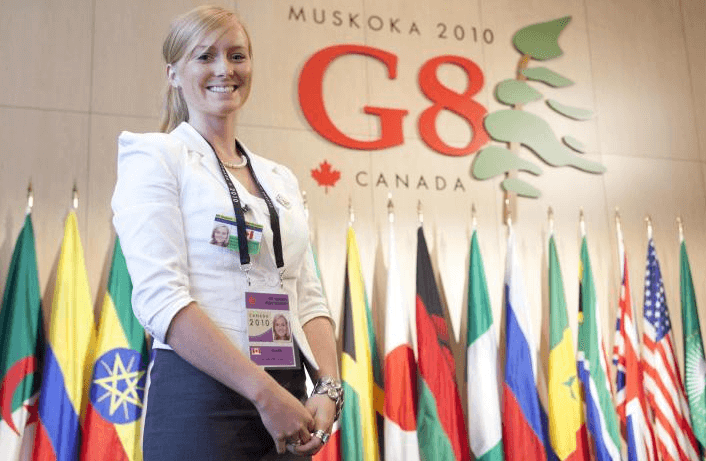 Cook representing Canada at the G8 Summit in Muskoka, Ontario, in 2010

As good as the journey has been, Cook has some regrets and a strong message for students undertaking post-secondary education.

Though she came back to finish her degree, she feels she didn’t make the most out of her time at university in social and extracurricular contexts, lamenting that she didn’t have more of what she calls “accidental collisions.”

“An accidental collision about opening yourself up to something that's outside of your norm, so meeting people that are outside of your sphere of influence and going places that you wouldn't always,” Cook says.

Your time in university - you blink and it's over. So get out of your comfort zone in as many dimensions as you possibly can because there’s so much of the world that you don’t know, and this is the time to explore and play with that before you jump into the next 30 years of your career.

A bright future for local businesses and agencies

While she’s proud and thankful for her accomplishments, Cook’s attention is squarely on the future, which she believes is bright for local businesses and the digital agencies who serve them. And Vendasta’s sole goal is to fuel their success.

The pandemic remains an ongoing issue, but underlying demand is at a global level is strong and unemployment is falling, which puts SMBs in a good position to benefit when consumers eventually return to shops, restaurants, and salons in droves as health restrictions ease.

However, the reality is the way people are buying things and interacting with local businesses is changing, and Cook says agencies need to play a leadership role in helping SMBs adapt to evolving and increasingly digital purchasing habits.

Local businesses are the lifeblood of our economy and we want to work with agencies to help business owners adapt to digital ways of doing business and win. Being the best in the world at understanding their problems is where agency owners will succeed. They should know deeply what their customers’ problems are, and then match the appropriate technology to what that business needs.

Vishal Teckchandani is a Content Marketing Specialist at Vendasta. A newcomer to Canada, he spent the last 14 years of his career in Australia as a financial services reporter and TV host. He has written extensively about how technology companies are transforming business processes and lives, and interviewed the CEOs of global banking, payments, SAAS, and cloud storage providers including Afterpay, ELMO Software, Macquarie Group, National Australia Bank, NextDC, and Zip Co. When he’s not creating content, Vishal loves to cook, explore Saskatchewan with his family, and volunteer for his community.

Read more to discover the top trends and challenges facing the MSP industry in 2022 with expert insights from Vendasta’s Andrew... Read More